Chlorophyll metabolism in the photosynthetic cell

There are not many scientists around the world who are systematically involved in the biosynthesis of chlorophyll and photosynthetic protein complexes. But Ing. Roman Sobotka, Ph.D., from the Institute of Microbiology of the Academy of Sciences of the Czech Republic. The Grant Agency of the Czech Republic provided funding for one of his latest projects “Regulation of the distribution of chlorophyll molecules in cyanobacteria cells”.

Chlorophyll belongs to tetrapyrroles, which is a group of colored substances – pigments, which also include heme, which carries oxygen in our blood and dyes it red. Although chlorophyll is green, it is not so chemically different from heme. Another group of tetrapyrroles are herbs such as bilirubin, which is yellow and its pathological accumulation in the body is a manifestation of jaundice. From an evolutionary point of view, the metabolic pathway used in cells to produce tetrapyrroles is a very old invention, it must have appeared at the very dawn of life. Heme needs a number of essential enzymes in cells, and chlorophyll appeared in evolution about a little later along with photosynthesis. That is why tetrapyrroles are called “pigments of life”. “However, photosynthesis gradually pumped our atmosphere with oxygen, and this created a problem with the biosynthesis of tetrapyrroles, which the first organisms on Earth did not have to solve. When you light up a tetrapyrrole such as chlorophyll, it absorbs the photon and jumps to a state called excited. This state does not last long and the photon emits again. However, if an oxygen molecule appears near the excited chlorophyll, the chlorophyll can take some of the absorbed energy and change into a form called an oxygen radical, ”describes Ing. Roman Sobotka.

In the laboratory of the Institute of Microbiology, Roman Sobotka’s team is trying to clarify how photosynthetic organisms can produce chlorophyll, incorporate it into the relevant proteins, while avoiding damage to the oxygen radical. Researchers are working on one type of model cyanobacteria called Synechocystis. Although cyanobacteria is de facto a bacterium that can perform photosynthesis, the results obtained on cyanobacteria are usually well applicable to plants and algae. As a laboratory model, however, cyanobacteria have a number of advantages over plants and algae. In cyanobacteria, genes are very easy to switch off and modify, the genome is simple, they grow fast and have other advantages.

“Working on cyanobacteria is quite fun, it only takes a few weeks to turn off the gene. What surprises me for a long time is the robustness of cyanobacteria. The whole cellular apparatus for photosynthesis is very complex and requires the interplay of hundreds of genes. In plants, it is common for the deletion of a particular gene to completely break up all photosynthesis. Our model cyanobacteria usually does not have a big problem with the same mutation. Or it compensates for it by rapidly mutating a completely different gene (it has 3,500 genes), and the two damaged genes put together functional photosynthesis again. In the project, we found that seemingly completely different mutations that disrupt the biosynthesis of the photosynthetic apparatus are always repaired by mutations in the enzyme that produces heme. This shows the crucial regulatory role of heme, so again we are with tetrapyrroles. We are trying to find out why this is happening, “explains Roman Sobotka.

Every cell is a boiler that has to burn a little all the time, if it goes out, it’s over. Life is incredibly resourceful in terms of the ability to burn even very miserable fuel, but the laws of thermodynamics dictate what can no longer be burned. Without photosynthesis, life would burn everything that could be oxidized on Earth, and then it would only survive or disappear altogether. It is necessary to realize that no other evolutionary innovation, including the very origin of life, has reshaped the planet as dramatically as photosynthesis.

Photosynthetic complexes on the assembly line

Photosystems are very complex protein complexes that are responsible for the fundamental reactions of photosynthesis and contain many chlorophyll molecules. How the cell produces these complexes is the subject of intensive research. Just like when a car engine is made up of individual parts in a certain order, the cell produces the individual parts and assembles everything in precisely defined steps. A number of proteins called “assembly” factors are involved in this assembly of photosystems, but what they are doing is not yet known. Roman Sobotka’s team managed to prove that at least two factors are involved in the binding of chlorophyll molecules to the protein subunits of the photosystem. “This was quite unexpected, because in the end their function is not in assembly, but in the production of their own ‘component’, which contains chlorophyll,” says Roman Sobotka. 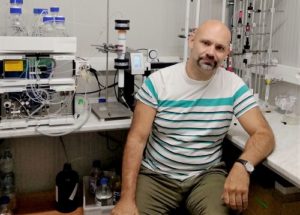 Awards of the GA CR and prestigious magazines

“The solution of the project brought new knowledge concerning the very tight regulation of chlorophyll distribution and the synthesis and assembly of photosystems I and II in the cyanobacterium Synechocystis, a key process due to the toxicity of free chlorophyll. It was also possible to reveal the organization of biosynthetic centers in the cell, where the biogenesis of photosystems takes place. The output of the project solution is six publications in prestigious magazines. The project therefore has an extraordinary contribution not only to the study of plant photosynthesis, but also to the cell biology of plants in general, “the GA CR commission appreciated the scientific work in its evaluation.

Ing. Roman Sobotka, Ph.D., studied genetic engineering at the Faculty of Agriculture of the University of South Bohemia. He leads his own scientific group at the Institute of Microbiology of the Academy of Sciences of the Czech Republic in the Algatech Center (Třeboň). He focuses on the biosynthesis and function of photosynthetic pigments and lectures at the Faculty of Science, University of South Bohemia.